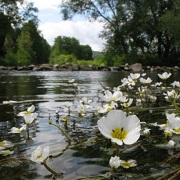 Watercourses of plain to montane zones with floating orsubmerged vegetation can be present in streams and rivers, backwaters with water through-flow, as well as near-naturaldrains.

Watercourses of plain to montane zones with floating or submerged vegetation can be present in streams and rivers, backwaters with water through-flow, as well as near-natural drains. The structure of this habitat can be described as layered communities of mostly rooted plants. The habitat was assessed as having an unfavourable-bad condition in the period of 2007-2012. Pressures mainly stem from human-related impacts such as modification of water courses and pollution. The same pressures affect key species of the habitat: the European Bitterling, the Barbel, the Eurasian Otter, River Lamprey and Atlantic Salmon. In Germany, measures including improvement and restoration of the water quality and the hydrological regime, as well as the establishment protected areas. Positive effects of measures taken to improve the status of the habitat also enabled a growth in population of the associated species across Germany.

The main pressures and threats on water courses of plain to montane levels with Ranunculion fluitantis and Callitricho-Batrachion vegetation in Germany are subject to human-related changes to river structure and hydrology. These structural changes may include modification of riverbanks, river canalisation and weir/dam construction, and the intensive maintenance of river bank vegetation. In addition to structural pressures, pollution, shipping and urbanisation that result in thermal heating of water bodies and pollution of surface water, invasive alien species, leisure fishing and other water sports, grassland removal for arable land, forest replanting, intensive maintenance of public parks and cleaning of beaches, and reduction of habitat connectivity put stress on the habitat.

The species inhabiting the habitat are affected by similar pressures and threats, as the quality of water and surrounding habitat affects their survival and breeding. For example, the European Bitterling is negatively impacted by water pollution, weed clearing, and stocking of predatory fish. Pollution in central Europe has been the main pressure affecting the Barbel. The River Lamprey is negatively affected by water pollution as well as canalisation, migration barriers and dredging while the Atlantic Salmon is in addition affected by professional fishing, poaching, agricultural intensification, disposal of household and recreation waste as well as marine and freshwater aquaculture. Depletion of food sources force otters to scout new habitat and therefore to cross roads. Consequentially, over half of otter deaths in Saxony are the result of traffic.

The German Federal Agency for Nature conservation advocates that protection schemes for water courses plain to montane levels should cover the entire watercourse complex as well as large sections of the watershed. In 2017, the Federal Republic of Germany responded to potential gaps in achieving requirements of the Water Framework Directive by 2027 by implementing the federal program ‘Blaues Band’ (blue thread). The aim is to restore almost 3,000 km of rivers (of 7,800km total) that are not used for navigation anymore. The idea for this action is based on a preceding implementation of a biotope network ‘Grünes Band’ (green thread) that follows the historic border between East and West Germany.

In light of the second ‘flood of the century’ in the same century in 2013, a focus in Germany was set on the renaturation of alluvial plains where rivers had been restructured. The Federal Ministry for Environment, Nature Conservation and Nuclear Safety (BMU) states that good conditions for implementation of measures include ambitious stakeholders that fuel the project, enough available areas for renaturation, public participation, and reconciliation of the aims of water economy and nature protection, as well as synergies amongst stakeholders from different sectors. Such measures have been implemented on federal state and regional levels through regional development programs, as well as in communes through land-use plans and at project levels.

In Germany, measures that have been most effective for the habitat presented here include the protection and conservation of streams, including their hydrology, trophic level and natural meandering course along with unfortified river banks. Also, the removal of weirs / dams and any other transverse structures that hinder river flow is beneficial to the ecosystem and migratory fish. Since one of the main threats to the otter in Germany is traffic, passages have also been put in place at bridges and other barriers that enable the animals to move along the river without crossing roads.

The LIFE+ Nature project ‘Optimisation of the Stream Valleys in the Arnsberg Forest’ (2009-2014) aimed to restructure the existing morphology back to a natural state and thus enhancing the ecosystem to benefit biodiversity. The project was organised by a local county working group, which collaborated with a regional nature conservation centre and a nature park. The forestry office and municipality were key participants within the project by allowing the measures to be carried out on their land, as well as contributing to their conception and implementation.

Another good example of successful stakeholder engagement is the LIFE project ‘Bachtäler Arnsberger Wald - Rehabilitation of the streams in the Arnsberger Wald’ (LIFE07 NAT/D/000214), which worked together with the Arnsberger Wald Nature Park to simultaneously build a sustainable nature conservation site as well as an attractive tourist location. The project additionally worked together with social institutions (international youth camps, agencies for long-term unemployed people) and engaged a high number of volunteers for project support with the help of local partners (BS Hochsauerlandkreis and ABU Soest).

Although information is lacking to quantify the impacts of the targeted measures (as described above), they have undoubtedly had a key role in maintaining or enhancing water courses with plain to montane levels and their associated key species. However, since many of the threats to the habitat are difficult to regulate, such as pollution through fertilisers, invasive species, and the continued intensive land use in areas surrounding the habitat, its conservation and improvement may prove difficult in the long-run.

Key funding sources are not fully documented, but the LIFE Nature Programme has played an important role in species and habitat recovery. The Federal government also funds programs, taken forward by ministries or regional authorities.

Examples of good practice, which could be applied to other habitats and species

EIONET (2014a): Data Sheet Info for the River Lamprey. https://bd.eionet.europa.eu/article17/reports2012/spe-cies/summary/datasheet/?region=ATL&period=3&subject=Lampetra+fluviatilis

EIONET (2014b): Data Sheet Info for the Atlantic Salmon. https://bd.eionet.europa.eu/article17/reports2012/spe-cies/summary/datasheet/?region=ATL&period=3&subject=Salmo+salar

Kottelat, M (2006) Fishes of Mongolia. A check-list of the fishes known to occur in Mongolia with comments on sys-tematics and nomenclature. The World Bank, Washington, DC. 103 p.

Renaud, C B (2011) Lampreys of the world. An annotated and illustrated catalogue of lamprey species known to date. FAO Species Catalogue for Fishery Purposes. No. 5. Rome, FAO. 109 pp.