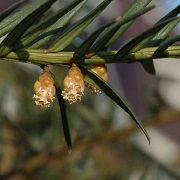 Taxus baccata (Yew) woods of the British Isles, which only occur inIreland and the UK, are forests composed of Yew trees and are relatively low in species diversity. Grazing by deer and invasive species are the primary pressures and threats to Yew woodlands in Ireland.

Improvements in the condition of Yew woodlands have occurred, and further improvements are expected, mainly as a result of conservation measures implemented as part of LIFE projects, the national Millennium Forest Initiative, and through the National Parks Service.

Key measures that are driving the improvements are long-term management of Yew woodlands in protected areas and, more recently, deer grazing management, control of invasive species, and the planting of new Yew stands in suitable areas for the habitat.

In its reporting under the Habitats Directive for 2007-12, Ireland indicated that invasive and non-native species and grazing in woodlands are high pressures for Yew woodlands. Grazing in this case refers to game (i.e. deer), and not to livestock. Reporting was based exclusively, or to a larger extent, on real data from sites/occurrences or other data sources. On the basis of expert judgment the main threats are considered to be the same as the existing pressures, but are expected to be of medium importance. These threats may be impacting woodland structure and regeneration potential of the species.

The main objective is the restoration of yew woodland, mostly through management of these forests in protected area sites and national parks. Removal of exotic species and planting of native and habitat specific species assisted in this process. Another objective was to encourage cooperation between NGOs and statutory bodies to ensure long-term management and results reaching a broad group of stakeholders.

Habitat restoration has included removal of invasive species (e.g. invasive shrubs), as this has been found to encourage the regeneration of the shrub layer and the growth of saplings in this habitat. Controls on grazing, such as through fencing to keep out deer, have also contributed to the improvement in the status of the Yew woodland and improved its prospects for the future. Furthermore, as part of the LIFE project ‘Restoring Priority Woodland Habitats in Ireland’, the planting of Yew trees and stands, and the removal of other tree species around existing Yews, has significantly expanded the area which can become Yew woodland habitat.

The creation of protected areas (SACs and National Parks) has also been important for Yew woodland, as it has allowed special measures to be undertaken and increased the availability of funds for conservation measures and staff, e.g. from the National Parks and Wildlife Service. The effects of such protected area designations have been noticeable over the long-term, especially at Killarney National Park, as this was established in the 1930s, and conservation measures for Yew woodlands have been taking place since the 1970s. The benefits of the long-term conservation efforts are reflected in the status of the Yew woodlands at the site.

National authorities including the National Parks and Wildlife Service, NGOs and volunteer groups, and the Irish semi-state forestry company Coillte are involved in Yew woodland conservation. For the Yew woodlands in Killarney National Park, the NGOs Woodlands of Ireland and the local Killarney Nature Conservation Group promote their conservation and influence policy, the former primarily at the local level. The Millennium Forests initiative provided strategic and funding support for Yew conservation. The initiative was a joint project of Allied Irish Banks and the Forest Service, managed by Coillte (a state-owned forestry company) and supported by Woodlands of Ireland.

Expansion and improvement of Yew woodland habitats has occurred in Ireland, with for example expansion of Yew Woodlands by 45.8 ha as a result of the LIFE project ‘Restoring Priority Woodland Habitats in Ireland’, and further improvements are expected.

In Killarney National Park, Yew woodlands are interspersed between other woodland habitats (e.g. oak woodlands). Therefore, the mosaic structure brings benefits to other habitat types from the positive impacts of management measures for the Yew woodland. At this site, Yew woodland sites lay along popular tourist routes. Though Yew woodlands as such are not extremely well-known to the general population and do not constitute a major tourist attraction on their own, their existence alongside other native habitats increases the overall diversity that makes the park unique. In this way, the Yew woodlands contribute to the cumulative attractiveness of the park as a tourist destination.

Funding from the National Parks and Wildlife Service supports labour (staff, contractors) and material costs for measures for Yew woodlands within Killarney National Park in Ireland. The Millennium Forests initiative also provided funding for the restoration of 16 Irish woodland communities, including Yew woodland. This funding supported important conservation measures for Yew woodlands in the Killarney National Park, such as fencing to prevent grazing damage by deer, invasive species control, and signage for tourists. LIFE funding also supported Yew woodland maintenance measures and the planting of Yew trees in potential new habitat areas through the project ‘Restoring Priority Woodland Habitats in Ireland’, which was carried out by Coillte.

During the economic crisis in the 2000s and 2010s, funding for conservation measures was reduced in Ireland, and many projects were scaled back to a maintenance phase. Since the crisis has subsided, more proactive conservation work is beginning to be undertaken again.

Ireland's 2014–2020 Forestry Programme provides core public funding for the implementation of the Strategy for Native Woodlands.

Quick wins that could be applied elsewhere for the habitat