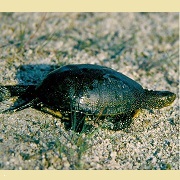 The European Pond Turtle is a widely distributed species in Europe. In the Boreal region of the EU, the species condition was assessed as unfavourable-bad during the last two reporting periods.

The main pressures stem from human-activities such as changes in farming (drainage, annual ploughing, the use of biocides and the abandonment of extensive grazing systems), forest planting on open ground, and landscape fragmentation as well as predation and climate change-related extreme weather events.

In view of these challenges, the species conservation measures taken by two LIFE projects helped improve its status regionally and triggered an increase in its population in Lithuania. The most effective measures were the protection of the species’ eggs and juveniles, as well as the improvement of habitat extent and quality and its ecological connectivity. Awareness raising amongst the public contributed to the species’ protection, but this process requires ongoing action.

The objective of the LIFE project ECONAT (LIFE09 NAT/LT/000581) was to create an ecological network in southern Lithuania to ensure the favourable conservation status of threatened populations of selected Habitats Directive Annex II and Annex IV-listed species, whilst simultaneously enhancing the ecological value of the target area. Specifically, the project aimed to secure the long-term viability of the target species within the ecological network by implementing direct conservation measures and habitat management actions. In particular, the project aimed to save the small and isolated populations of two umbrella species, the threatened European pond turtle (Emys orbicularis) and the European tree frog (Hyla arborea), from extinction.

The NELEAP and ECONAT LIFE projects established of two core areas of the ecological network. In these areas, extensive livestock farming was maintained to keep the habitats in good condition. A demonstration farm was also used to show farmers in the neighbourhood how to maintain the environment and generate income at the same time. In response to the insufficient protection of the threatened target species and ecological connectivity among the core areas, the ECONAT LIFE project team developed an ecological network, including the preparation of criteria, methods and management plans for the target species. The project proposed the enlargement of one Natura 2000 site and the creation of four new sites to enhance the network, which were designated by the Ministry of Environment. The subsequent management plans for the sites included specific habitat maintenance measures for a ten-year period to protect the above-mentioned amphibian and reptile species. The Good Practice Guide, prepared during the project, provides a detailed description on these issues. The project also developed criteria for defining the favourable conservation status of a range of target species, and this work revealed that securing favourable conservation status of small isolated populations by connecting them through green infrastructure is more cost-effective than strengthening each population separately. A specific conservation practice followed in Lithuania is the attention given to the species’ protection over its first two life-cycle phases (i.e. the protection of eggs and nesting places and protection of immature animals), as adult turtles are not affected by natural predators in the country. For example, the nesting sites are protected from predators, such as the Red Fox, using either covers or fences, though the latter proved to be ineffective as the turtle avoided the fenced areas.

During information field days of the ECONAT LIFE project, farmers were introduced to the practices of wetland grazing using appropriate breeds of beef cattle. As a result, farmers in surrounding areas purchased beef cattle and started to use wetlands for grazing. The beef cattle grazed the willow and stayed in wetlands during the summer heat, so farmers benefitted from an enlarged grazing area, whilst keeping the wetlands free of high vegetation.

To increase the potential for replication, the project organised four experience-exchange workshops and four study tours on particular topics. During the study tours, the Lithuanian national experts visited German, Latvian, Estonian, Danish and Polish colleagues. Together, they discussed the methods and exchanged knowledge on specific topics (e.g. rearing methods, environmentally friendly farming practices, amphibian conservation – prevention of road mortality, and restoration of reptilian and amphibian habitats). The results were brought together in the Best Practice Guidelines (‘Development of a Pilot Ecological Network in Southern Lithuania’) and distributed to target audiences.

The ECONAT LIFE project also included a range of local community and other stakeholder awareness raising activities. These included more than 150 educational activities in schools about the importance of preserving the endangered species. In addition, the National Visitors Center in the State Service for Protected Areas under the Ministry of Environment began offering educational sightseeing tours for school pupils (years 1-5) on the species. One of project partners, the Lithuanian Zoological Garden, organised four educational ‘Turtle Days’. The project activities encouraged local communities to join nature conservation activities by organising numerous and time-intensive meetings with landowners in the project area, during which the European Pond Turtle’s habitat needs and species protection measures were explained to farmers. Furthermore, developing understanding between different stakeholders, such as Road Administration representative under the Ministry of Transport and Communications and Veisiejai Regional Park administrators, led to the construction of a road pass for the turtle in the Regional Park, financed by the Lithuanian Road Administration.

The NELEAP project improved the conservation status of its targets species: namely the European Pond Turtle, the European Fire-Bellied Toad and the Northern Crested Newt. Conservation work included pond digging and restoration, the creation of nesting and hibernation sites for turtles, and the implementation of a sustainable grazing regime. Furthermore, an extensive awareness campaign was carried out to improve the knowledge of experts and local communities. The impact of the project actions was monitored up to the project end. The data showed that the species can colonise quickly the restored habitats, e.g. the newly dug or restored ponds acquire within 2-3 years typical vegetation, fauna and ecological qualities that are suitable for the target species. The farms in the project sites ensure long-term management, supported by the agri-environmental schemes and the farming of cattle.

The implementation of these LIFE projects improved the condition of European Pond Turtle habitats, which, due to natural succession and anthropogenic impacts, had been severely degraded, and also improved the viability of the turtle’s meta-populations. Although these did not lead to an overall improvements in the conservation status of the species, it did have positive impacts at a regional level (i.e. in southern Lithuania). The European Pond Turtle is considered to be an ‘umbrella species’, whereby its preservation ensures the preservation of other species sharing the same type of the habitats. For example, the turtle shares its habitats with other high conservation-value species, such as the Northern Crested Newt and European Fire-Bellied Toad. Other target species included in the ECONAT LIFE project were the Natterjack Toad (Bufo calamita), European Green Toad (Bufo viridis), European Tree Frog (Hyla arborea), Sand Lizard (Lacerta agilis), Common Spadefoot Toad (Pelobates fuscus), Moor Frog (Rana arvalis) and the Pool Frog (Rana lessonae). Finally, the advice given to farmers on wetland grazing also provided socio-economic benefits. As the abandonment of infertile land increases in the region, new approaches to support the viability of extensive grazing using hardy cattle breeds helps provide job opportunities in an area with high unemployment.

1)       the creation and restoration of habitats suitable to the species;

3)       the artificial incubation of rescued turtle eggs and their release into restored habitats.

Examples of good practice that could be applied to other species

Atatur, M K (1995) A preliminary report on the present status of Turkey's terrestrial and fresh-water turtles from the viewpoint of conservation. In: Ballasina, Donato (ed.) Red Data Book on Mediterranean Chelonians, pp. 183-190. Edagricole, Bologna, Italy. (In van Dijk and Sindaco, 2004).