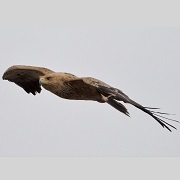 The Spanish Imperial Eagle is a European endemic species that was close to global extinction in the 1960s, as a result of poisoning, electrocution from electricity towers and habitat degradation. The improvement in its conservation status has been achieved through a concerted programme of LIFE Nature projects.

The most important drivers to the success of these conservation measures have been the initial research that was conducted on the main threats to the species, the coordinated action that took place through national and regional action plans, as well as the wide implementation of key measures. These included the modification of electricity structures, legal protection and enforcement to reduce poisoning, and habitat management measures that engaged all key stakeholders.

No new measures are urgently required for this species as it is now recovering in all its range states, but continued conservation management is necessary to support its populations in the Iberian Peninsula.

As a naturally long-lived species with relatively low breeding success rates, its populations are particularly susceptible to increases in rates of adult mortality. The main threats to the species currently result from electrocution, accidental and deliberate poisoning and habitat change. In a study that examined the death of 267 Spanish Imperial Eagles between 1989 and 2004, 91.7% of the causes of mortality (where the cause of death could be determined) were of human origin, with electrocution and poisoning being by far the most common causes of death.

Other pressures include habitat fragmentation as a result of deforestation for agriculture and timber, and suitable habitat in breeding and dispersal areas has also declined as a consequence of urban development and other land-use changes. Breeding success has also been affected by declines in rabbit populations as a result of myxamatosis in the 1950s, and more recently viral haemorrhagic disease. This has been exacerbated by changes in the management of hunting estates to favour larger quarry species, such as deer and boar, rather than rabbits and partridges. Human disturbance (eg tourism) of nesting birds can reduce breeding success and the ingestion of lead shot embedded in the flesh of prey items may be a problem in certain areas in the long term as it can result in heavy metal bioaccumulation. The installation of wind turbines and solar power plants also pose an increasing threat for the conservation of the species.

Main objectives of LIFE projects addressing the Imperial Eagle in the 90s included the monitoring of the population, its distribution, mortality, nesting areas and breeding success in order to identify and subsequently avoid human disturbances and provide supplementary feeding to breeding pairs when necessary. Specifically, an objective was to reduce disturbances through power lines. Awareness raising of landowners and hunters, whose actions could directly or indirectly harm the target species was also an objective. More recent objectives include combatting illegal poisoning of the species.

A major effort has been made to reduce the electrocution of birds on power lines. The LIFE projects led to agreements with public electricity companies on modifying power lines to reduce their threat to birds. As a result, from 1991-1999, 14,370 dangerous electric towers were modified, considerably reducing deaths from electrocution although not all mitigation measures have proved to be totally effective for this species. Furthermore, by 2008, a Spanish Royal Decree was published governing technical regulations for high tension power lines to protect birds. Further, the ‘Alzando el Vuelo’ (Flying High) programme of SEO/BirdLife and the private land protection of Fundación de Amigos del Aguila Imperial (FAAI) engaged national authorities, local communities and private landowners in conserving and protecting the Spanish Imperial Eagles’ habitat. Under this, agreements have been signed with landowners who manage their land sympathetically for the species. This has created an extensive network over 54 municipalities with nearly 50% of breeding pairs covered by such projects. Work is on-going to raise awareness and support on private land where the species breeds, including improving habitat management.

Other conservation measures that have been taken include a supplementary feeding programme to mitigate the effects of rabbit decreases, which has significantly increased breeding success. Nest surveillance has also reduced disturbance and improved reproductive success.

Since 1987, national and regional governments have been implementing conservation measures for the Spanish Imperial Eagle, in collaboration with several organisations, including WWF and SEO/BirdLife Spain and municipalities. In the early 1990s, the five Regional Governments in the eagle’s range came together with the Directorate-General for Nature Conservation of the National Environment Ministry to agree a Coordinated Recovery Plan for the species, and a set of linked LIFE projects in three stages across the five regions was developed. The first set of projects started in 1992, with the third finishing by 2000. Each region published a species action plan (SAP), i.e. recovery plan, for the species and a National Conservation Strategy was also produced, which was formally approved in July 2001. Different Regional Authorities and national government departments established a LIFE programme Steering Committee. From 1997, the group became known as the Imperial Eagle Task Force. Engagement with private landowners and the electricity supply sector has also been important.

There is little doubt that the conservation measures taken to date have been the main cause of the recovery of this species in both Spain and Portugal. The Spanish population is estimated to have increased by 135% from 2001 to 2012 and the species recolonised Portugal in 2003. According to the most recent published data, 358 pairs were counted in Spain in 2012, giving an overall estimate of c.370-380 pairs, and the Portuguese population was estimated at 11-18 pairs in 2013; so the current total population is around 1,100 individuals.

Without such actions the Spanish Imperial Eagle may well have become extinct. However, the recovery may also have been aided by changes in social attitudes towards birds of prey, and recoveries in the species' main prey (rabbits) from disease outbreaks. Attitudes to the Spanish Imperial Eagle have significantly improved and effective measures were established to increase the European rabbit populations through management agreements with land owners and hunting managers. It should be noted, however, that progress has not been made in relation to the use of lead shot among hunters despite the availability of other (more expensive) type of ammunition.

The total costs of the conservation are not known as key funding sources are not fully documented. The LIFE Nature Programme has played a major role in the species recovery, in particular through the 23 projects listed in Annex 1. Together these amount to at least €26 million over the period 1992 – 2007. This constitutes by far the main source of funding for the conservation of the species.

It is estimated that nearly €2.6 million were spent on the mitigation of bird electrocution in Andalucía during 1992–2009. A total of €12 million were leveraged from the National Government and Community funds such as the European Regional Development Fund to fund modification of power lines in the 2004-2007 period.

Examples of good practice, which could be applied to other habitats and species

Sánchez, B, González, L and Barov, B (2008) Action plan for the Spanish Imperial Eagle Aquila adalberti in the European Union.