Humid dune slacks in the Netherlands 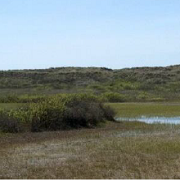 Humid Dune Slacks have an unfavourable conservation status in the majority of EU Member States, principally due to changes in water conditions and natural succession. In the Netherlands, these problems are aggravated by desiccation, eutrophication and soil acidification due to nitrogen deposition. Several restoration programmes for the habitat and other dune habitats have been carried out, including through LIFE projects, initiated by various authorities.

These efforts have improved habitat quality, but to ensure a long-term favourable conservation status, further measures will be required to reduce nitrogen emissions and to ensure recolonisation of the habitat’s characteristic plant and insect species.

According to the Member State Article 17 reports under the Habitats Directive for 2007-12, the two most frequently reported and highly important pressures were changes in water bodies conditions and vegetation succession/biocenotic evolution. The same factors were reported as highly important threats: vegetation succession/biocenotic evolution and changes in water bodies conditions. These two pressures are also the most important ones in the Netherlands. According to Dutch reporting, the main pressures are (ground)water abstractions/changes and changes in species composition and succession. Dune slacks in the Netherlands have suffered from desiccation, acidification, eutrophication and enhanced vegetation succession. Various factors have influenced the vegetation changes. Vegetation change by soil acidification and eutrophication has for example been increased by air-pollution by atmospheric deposition of nitrogen, and accelerated by the decimation of the European Rabbit (Oryctolagus cuniculus) population by myxomatosis and viral haemorrhagic disease.

Natuurmonumenten (the NGO responsible for management of a majority of nature areas in the Netherlands) and the province of North Holland initiated the Dutch Dune Revival LIFE project, with a budget of €6 million. Utrecht University did research on the effects interventions and PWN, (Amsterdam Dunes Water Supply) monitored the changes. The main target was to (re)create a more dynamic landscape with original vegetation and drifting dunes. The Amsterdam Dune LIFE project aimed to expand and improve in quality the habitats of ‘fixed coastal dunes with herbaceous vegetation’ (2130), ‘dunes with Hippophae rhamnoide’ (2160) and ‘humid dune slacks’ (2190), which in turn also improves several species protected by the Habitats Directive, such Narrow-mouthed Whorl Snail (Vertigo angustior), Large White-faced darter (Leucorrhinia pectoralis), and the Fen Orchid (Liparis loeselii). The LIFE project Revitalising Noordduinen aimed to revitalise the grey dunes in the Noordduinen, by removing hardened surfaces, introducing anti-desiccation measures, counteracting the negative effects of eutrophication and reconverting an agricultural area into a humid dune slack, combating the invasive alien species Japanese Rose (Rosa rugosa) and improving access to the area. The main objective of the project Dutch Coastal Dunes LIFE project was to create favourable conservation conditions through a set of related measures carried out on 4,700 ha of dunes covering eight Natura 2000 sites.

Over 140 hectares of trees and bushes were removed from wet dune slacks to create more space for young dune slack vegetation. Alongside removing the dense vegetation, soil hydrology was improved and various sites were re-wetted by for example changing water abstraction, filling or rerouting ditches, or removing topsoil. Often the nutrient enriched topsoil was removed to recreate favourable nutrient-poor conditions for target plant communities. To create a dynamic landscape, a number of slots were dug from the seaside inwards. These acted as funnels for the wind. As the top soil was removed, a large amount of sand started to drift and covered habitats nearby, which created low-nutrient conditions and reduced the acidification and the succession in neighbouring grey dunes. In total, the project conducted habitat restoration on nearly 190 ha of white dune, grey dune and dune slack habitats. The interventions were quite drastic and might easily be (mis)judged as harmful for nature and people. Therefore, at the start of project much attention was paid to communicating with the local inhabitants, who were concerned with their safety, as dunes provide shelter from the sea and inundations.

An important finding was that hydrological restoration alone, by means of removing groundwater extraction wells, without additional sod-cutting, have sometimes led to a steady state of already existing low-quality communities from the Caricion davallianae and even partially to an undesired increased succession with grass and shrub encroachment. In those cases, target pioneer communities did not return as expected. Sod-cutting therefore often seems necessary to counteract progressive succession and restore open habitats and pioneer communities

Various parties have been involved in actions with respect to humid dune slacks in the Netherlands. National programs for improving the quality of nature management are SNL (‘Subsidieregeling Natuur en Landschap’), PAS (‘Integrated Approach to Nitrogen’) and OBN (‘Ontwikkeling en Beheer Natuurkwaliteit’) a knowledge network for restoration and management of nature where policy makers, site managers and scientists cooperate in the management and restoration of natural areas.

Plans for restoration of dune slacks have been made by various land owners / nature management organisations (PWN, Waternet, Natuurmonumenten and Staatsbosbeheer) in combination with various national or regional authorities (provinces, regional water authorities). In several cases universities have assisted. Several LIFE projects have contributed to the conservation and restoration of the habitat. The Amsterdam Dune project was initiated by the water company Waternet. Other LIFE projects were coordinated by the nature protection organisations Landschap Noord-Holland (Revitalising Noordduinen), Natuurmonumenten (Dutch Dune Revival) and staatsbosbeheer (Dutch Coastal Dunes) or the national authorities of Rijkswaterstaat. The main partners in these projects were national and regional authorities, such as the Ministry of Economic Affairs, as well as provinces and regional water authorities, nature protection organisations and water companies.

About 4,700 ha of dunes benefited from the Dutch Coastal Dunes project, which was the largest area affected by the LIFE projects. Wet and moist pioneer communities (Littorellion uniflora and Nanocyperion flavescentis) were observed in areas exhibiting the first restoration phases of species-rich dune slacks. During the monitoring study of wet dune slacks on Terschelling, 15 IUCN Red List species were observed, of which some were abundant: Shoreweed (Littorella uniflora), Round-leaved Sundew (Drosera rotundifolia), Bog Myrtle (Myrica Gale), Allseed (Chenopodium polyspermum), Lesser Water-plantain (Baldellia ranunculoides) and Yellow Centaury (Centaurea solstitialis). In the Amsterdam Dunes project area, 170 ha of woodland scrub was removed, 24 ha of humid dune slacks were extended and 250 ha of grey dunes were improved. Early impacts from the measures were positive for dune slacks and pools, although the supply of sufficient base-rich groundwater with seepage and sufficient dispersion of the targeted species from the surrounding area might limit full restoration.

In many of the projects, measures were taken to improve other target dune habitats, such as white and grey dunes. Moreover, many dune habitats and species will gain from the revitalisation of dynamic dune processes and restored hydrology. Effects on other economic and social ecosystem services have not been examined, although effects might be present since Dutch dune areas are highly appreciated and important for recreation.

MinEZ (2016) Prioritised Action Framework (PAF) for Natura 2000 for the Netherlands.