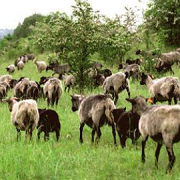 Calcareous Festuco-Brometalia grasslands and scrubland facies are among the most species-rich plant communities in Europe and contain a large number of rare and endangered plant species. Their conservation status in the EU is assessed as unfavourable-bad and deteriorating, mainly because of the abandonment of low intensity grazing and succession of the habitat into scrub and woodland. Poland, however, reported an improving trend for the estimated 30 km2 of habitat in its Continental biogeographic region.

This is due to restoration of the condition of several hundred hectares of the grassland, together with uptake of agri-environment agreements for extensive grazing on a much larger proportion of the habitat area since 2014.

The key restoration methods were removal of shrubs and trees and reinstatement of extensive grazing, but other innovative methods have also been successfully trialled including top soil removal, sowing seeds and transplanting pieces of sod; and recovery of grasslands overgrown by expansive bushes using black foil lining.

Poland reported the following pressures on this particular habitat: abandonment of pastoral systems and grazing and the resulting succession, accumulation of organic material and in some places lack of mowing or burning down of vegetation.

The habitat is under pressure from the spread of invasive alien species. The Black Locust tree (Robinia pseudoacacia) has a highly negative impact by increasing the soil fertility through nitrogen fixation. Abandoned grasslands are also subject to invasion by expansive rhizomatous native, which may be somewhat poisonous to sheep although they will eat it.

The habitat is very sensitive to eutrophication from airborne nitrogen deposition and fertiliser drift, and to acidification from planted conifers. This is a problem in all areas of Poland. Other localised pressures are high levels of recreational/tourist use and trash dumping.

In Poland, the habitat has been targeted by five LIFE projects since 2008. These have aimed to restore around 462 ha of xerothermic grassland habitat complexes in Poland. Three of the projects are still ongoing. Project objectives of the finalised XericGrasslandsPL LIFE project focused on improving habitat conditions and restricting succession of undesirable species on selected areas of dry grasslands by active conservation. Specific project objectives covered: the reintroduction of traditional agriculture (mainly extensive grazing) on parts of the targeted habitat, to ensure their lasting and effective conservation; enhancing biodiversity on the project sites by forming a dynamic mosaic of habitats; and creating a knowledge base for the complete and complex conservation of these dry grasslands in Poland. The project planned to conserve eight Natura 2000 sites, five habitats listed in Annex I of the Habitat Directive (including three priority habitats) and nine species listed in Annex II of this directive.

The main objectives of LIFE project Ochrona obszaru PKOG were to preserve and protect the valuable habitats of the Czestochowska Upland in four Natura 2000 sites, to form a network of landscape and natural ecological corridors; and to gain the active support of the local community of the need to protect and preserve the region’s typical natural features.

The LIFE project ‘XericGrasslandsPL targeted around 225 ha of xerothermic grassland habitat mosaics in 8 Natura 2000 sites by removing scrub or tree thickets, removing invasive alien herbaceous plant species  and reinstating grazing. In degraded areas, xerothermic grasslands were experimentally restored by removal of the topmost soil layer, sowing xerothermic species' seeds, transplanting well-preserved patches of grasslands etc. The project also removed illegal landfills, created management plans for four Natura 2000 sites, channelled tourist traffic with signage, information and paths, and raised awareness of the Natura 2000 network in more than 15 000 persons. By 2015, the condition of the grazed grasslands was significantly improved, with a reduction in the share of expansive species (ryegrass, sand reed and shrubs). The grazing period was cut to 3 months (June-August) partly as a result of the improved condition, and partly due to drought, which further limited the expansive species and allowed the development of xerothermic species. The LIFE project ‘Ochrona obszaru PKOG’ targeted around 100 ha of the most valuable xerothermic and rock grassland ecosystems located in four Natura 2000 sites in the Orle Gniazda Landscape Park, by coordinating and streamlining recreational activities such as rock climbing, and by removing invasive alien species.

A number of conservation programmes by NGOs and managers of landscape parks and national parks have cleared shrubs and invasive species and restored grazing on Natura 2000 sites in the last decade. Key NGO stakeholders are the Polish Naturalist’s Club (Klub Przyrodników) in several regions, Klub Gaja in the Pomeranian region, the Wetland Protection Centre (Centrum Ochrony Mokradel CMOK) and the Polish Birds (Ptaki Polskie) in north-eastern Poland, the Polish Society for Birds Protection (Polskie Towarzystwo Ochrony Ptaków), and the Wildlife Society Bocian. Landscape park authorities that have restored management of the habitat include Chełmiński and Nadwiślanski, the Silesian Voivodeship Landscape Park Complex, the Wyżyna Lubelska Landscape Park Complex, the Kazimierski Landscape Park (together with Lublin Botanical Garden), as well as Ojcowski and Pieniński National Parks. The Regional Directorate for Environmental Protection in Krakow (Regionalna Dyrekcja Ochrony Środowiska w Krakowie RDOŚ) has initiated large-scale actions Natura 2000 sites in Kraków region, and the Regional Directorate for Environmental Protection in Lublin similarly in the Lublin Voivodeship. Several other RDEPs (e.g. Katowice, Szczecin) are also very active in protection of Natura 2000 sites. The key land-owning stakeholders may be individual farmers, farming communities, or public entities.

The XericGrasslandsPL LIFE project significantly improved the condition of several hundred hectares of grazed grasslands by 2015, with a reduction in the share of expansive species (ryegrass, sand reed and shrubs). This represents the restoration of around a tenth of the calcareous grassland habitat (H6210) in the Natura 2000 network. The project resulted in the reintroduction of extensive grazing on over 67 ha of target habitat; and restoration of over 20 ha of target habitat. Agri-environment uptake for semi-natural dry habitats significantly improved in the 2014-20 period. By 2017, the area under the schemes for xerothermic and sandy grasslands and heathlands both inside and outside Natura 2000 sites had increased to 4,951 ha.  As a result of the extensive preparation of Plans of Conservation Measures (a form of simplified management plan) for more than 400 Natura 2000 sites, at least part of the conservation needs of xerothermic grasslands has been identified, which is being followed by the development of conservation projects and application for implementation funds. The roll out of protection measures that prevent the conversion of grasslands to scrubland and forest communities in the main habitat areas have given rise to the habitat’s future prospects being assessed as favourable.

The XericGrasslandsPL project also boosted and stabilised the population of Echium russicum on the eight Natura 2000 sites targeted by the project (through planting of ex situ cultivated seedlings followed by dispersal of the seeds of these plants). It also had an indirect positive influence on populations of other species from the Annex II of the Habitats Directive, including: European Ground Squirrel, Southern Birch Mouse, Danube Clouded Yellow, Scarce Large Blue (Maculinea teleius), Dusky Large Blue (Maculinea nausithous), Carlina onopordifolia and Cypripedium calceolus. It can be expected that the other LIFE project and agri-environment conservation measures for the habitat also had similar wide biodiversity beneficial impacts.

The main funding source has been the Polish agri-environment programme. The 2007-13 agri-environment programme contained a package of schemes designed for semi-natural habitats and similar options within Natura 2000 sites. The Variant 4.5 and 5.5. sub-schemes supported grazing (with stocking of 0.3 to 1 LU per ha and no fertiliser) or in justified cases mowing from mid-July to end September (with 15-20% of land left unmown in any one year, removal or stacking the cut biomass within a period no longer than 2 weeks after mowing) of xerothermic and sandy grasslands and heathlands. The area under Variant 4.5 or Variant 5.5 peaked at 460 ha in 2014. To carry out these variants, a preliminary habitat assessment by a certified expert, contracted by the farmer, was required; the cost of which was reimbursed to the farmer as a flat payment. However, this still only covered a small fraction of area of the eligible Annex I habitats. Whilst the payment amount was attractive in some conditions, it was not for grazing small grassland areas on steep slopes.

The Operational Programme Infrastructure & Environment 2007-2013 included funding for the protection of Annex II species and non-forest habitats in Natura 2000 sites on state owned land (planning of protective measures, protection and restoration of degraded habitats and some land purchase from private landowners). Funding was administered by the state forestry entity. However, opportunities were not highlighted so uptake was low.

The two EU-funded LIFE projects which restored significant areas of habitat 6210 in Poland in the last decade provided a total of around €3 million, although it should be noted that both projects addressed habitat mosaics of a number of different habitat types and not just 6210.

Quick wins that could be applied elsewhere for the habitat

Ministry of Agriculture and Rural Development (2009) Regulation of Minister of Agriculture and Rural Development from 26 February 2009 on detailed conditions and procedures for the granting of financial assistance under the measure "Agri-environmental Program" Development of the Programme Rural Areas for 2007-2013 (in Polish only). Available at: http://www.minrol.gov.pl/pol/Wsparcie-rolnictwa-i-rybolowstwa/PROW-2007-2013/Dzialania-PROW-2007-2013/Os-2-Poprawa-srodowiska-naturalnego-i-obszarow-wiejskich/Program-rolnosrodowiskowy-Platnosci-rolnosrodowiskowe/Legislacja

Owadowska-Cornil, Edyta (2018) personal communication by email, April and May 2018

Poschlod, P and WallisDeVries, M F (2002) The histori7cal and socioeconomic perspective of calcareous grasslands - lessons from the distant and recent past, Biodiversity Conservation, 104(3), pp. 361-376.