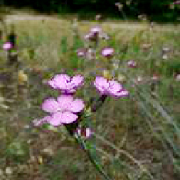 Endemic to the Pannonian biogeographical region, Dianthus diutinus inhabits open patchworks of grassland and scattered stands of forests, and is nowadays only found in the area between the Danube and Tisza rivers in central Hungary.

The majority of its habitat has been afforested and fragmented by large-scale pine tree plantations, and degraded due to the spread of invasive alien species. As a result, the population size of Dianthus diutinus had shrunk to approximately 20,000 individuals by 2007, consisting of 10 small and isolated subpopulations.

The LIFE project HUNDIDI implemented measures that eventually improved the population size and the quality of the habitat of Dianthus diutinus. The population reached 97,738 individuals by the end of the LIFE project in 2011. In addition, the area of interconnected and unbroken habitat for the species has increased to 455 ha.

The main threats to the species result from habitat loss and fragmentation, which have occurred due to afforestation and forestry activity, and habitat degradation. As a result of the large-scale afforestation activities that were carried out in the second half of the 20th century, the area of shifting sand dunes that used to be characteristic of the region has declined greatly. Remnants of the former sand vegetation (including Dianthus diutinus) have survived only in patches. Habitat loss and fragmentation resulted in a declining population size and an increasing isolation of subpopulations, which reduced genetic diversity. In 2008, 70% of the total population of Dianthus diutinus could be found in alien forest plantations (pine trees): between the tree lines, at the side of forestry roads and in small grassland patches (maximum 1 ha) between forested areas. The spread of invasive alien species poses the greatest threat, with the rapid expansion of Common Milkweed (Asclepias syriaca), Black Locust (Robinia pseudo-acacia), Tree of Heaven (Ailanthus altissima) and Black Cherry (Prunus serotina).

The main objective of the LIFE project HUNDIDI was to stabilise 85% of the presently known stands of the target species, Dianthus diutinus. This percentage relates to the number of individuals in populations inside the three project areas based on the Species Conservation Action Plan compiled in 2004. In order to reverse the continuous decrease of the population caused by habitat diminution and isolation of the subpopulations, the project aimed to create a semi-natural habitat network by enlarging and connecting present habitats at the three most important sites for the species: Bodoglár, Bócsa, Csévharaszt. These sites would not be affected by forestry activity. Informing the general public about the importance of these unique habitats was considered vital for improving the long-run survival of this species.

A first set of key measures under LIFE HUNDIDI concerned the restoration of degraded and fragmented habitats, which consisted of thinning/clearing alien tree plantations of Black Pine, Black Locust and Tree of Heaven, and eliminating Common Milkweed in grassland areas at the three project sites. As regards the restoration of grasslands, mechanical methods were used in combination with the precise application of chemical treatments to eliminate the Common Milkweed. To avoid damaging the native vegetation, the treatment method was selected according to the density of the Common Milkweed stands and the natural status of the vegetation. In high nature value areas with few Common Milkweed plants, the leaves were treated with chemicals individually by brush, while the dense, heavily invaded areas were sprayed. Treatments were applied 2-3 times annually and resulted in a 90% decrease of the invaded area compared to 2007, and in a significant decrease in the density of surviving populations.

In parallel to the habitat restoration work, reintroduction of Dianthus diutinus, in collaboration with the University of Szeged was undertaken. The original aim was the ex situ propagation and re-establishment of 15,000 individuals in order to stabilize the size of the three natural populations, and to build up continuity between the natural patches with the newly planted individuals. One month after germination the seedlings were transplanted individually in growing pots and after two weeks of acclimation in a greenhouse, were planted out in good quality open perennial grasslands areas. The young plants were planted in patches, with the research team paying attention to making the pattern of plant patches similar to that of natural ones. Between autumn 2007 and spring 2011, the planting was repeated annually, so as to establish a plant stand with varying age structure, and comparisons were made of the survival of plants in the spring and autumn plantings.

In total, 18,777 of such ex situ raised plants were reintroduced to three project sites with survival rates varying from 10% to 80% depending on the season and the site. Consequently, these measures were considered to be highly successful and complementary to the habitat restoration work.

In addition to the habitat restoration and ex-situ conservation activities, public awareness raising and stakeholder mobilisation were important supporting measures that were implemented as part of the LIFE HUNDIDI project and contributed to its success. The long-term survival prospects of the target species was improved by informing the general public about the importance of its unique habitat. Over the course of the project, eight regional meetings with local foresters were held in order to ensure that their activities respect nature conservation goals. The information campaign also entailed the production of a wide range of materials and the installation of 17 information boards at the project sites and in the town of Kiskunmajsa and at the Botanical Garden of the Szeged University. The project also produced a film that was broadcasted five times on national TV channels. The project’s results were also presented at nine scientific events, both in Hungary and abroad, and in six scientific articles. Finally, a nature trail was established at Bodoglár in order to get visitors, both locals and tourists, acquainted with the strictly protected plant, its habitats and the conservation measures needed for their long-term survival. The trail had great demonstrational value, since the constructed board-walk and information boards provide a unique opportunity for visiting the area in an organised way without causing any soil or vegetation damage, both as self-organized or guided trips. It also demonstrated the fruitful cooperation of project partners and drew attention to the importance of the Natura 2000 network and locals involvement in the long-term protection of Dianthus diutinus.

Monitoring activities carried out as part of LIFE HUNDIDI show that a significant increase in the population size of Dianthus diutinus had occurred by 2011. Furthermore, habitat restoration extended the interconnected and unbroken habitat area for the target species to 455 ha.

It is important to stress that this increase in numbers was attributed not only to the success of the restoration activities but also to the intensive fieldwork, which led to the discovery of new populations. Over the course of LIFE HUNDIDI, four new populations of Dianthus diutinus were found, including one with more than 10,000 individuals. Therefore, the improvement in the conservation status of Dianthus Diutinus is not only genuine but also a result of better knowledge.

Other impacts relate to the construction of the high-quality, freely accessible, nature trail on the Bodoglár site (1.5 km). The nature trail was established in order to get visitors acquainted with the protected endemic plant and its habitat.

The nature conservational value of Dianthus diutinus has been estimated at 250,000 HUF.

As regards the activities carried out as part of the After-LIFE Conservation Plan, costs were born by the Kiskunság National Park, from its regular budget. To fund future activities, the National Park is considering applying for a new LIFE project.

Németh A, Mihalik E, Makra O, Balogh L, Szatmári M (2011) Conservation of the Pannon endemic Dianthus diutinus Kit. with ex situ and in situ methods. Proc Ex situ propagation and reestablishment of the Pannonian endemic Dianthus diutinus. Contribution of the Botanic Garden of the University of Szeged to the implementation of the LIFE06 NAT/H/000104 project. Steppe Oak Woods and Pannonic Sand Steppes. Available online at: http://wwf.hu/media/file/1318412920_Conference_abstract_book.pdf).