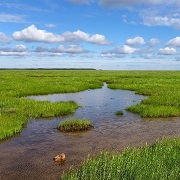 Boreal Baltic coastal meadows are low growing plant communities in the geolittoral zone, sometimes interspersed with salt patches. The habitat is found around the coastlines of the Baltic Sea on areas of land upheaval where livestock has been grazing since prehistoric times, preventing the establishment of forest. It occurs mainly in the Boreal biogeographic region in Finland, Estonia, Latvia and Sweden.

The potential range of coastal meadows in Finland lies along the whole coastline from the Eastern Gulf of Finland to the bottom of the Bothnian Bay. In Finland, the conservation status was assessed as unfavourable-bad on previous reporting rounds 2007 and 2013 under the EU Habitats Directive.

Abandonment of traditional agricultural activities has made this habitat endangered throughout its range. Other pressures are mixed source pollution to surface and ground waters (eutrophication of the Baltic Sea coastal waters), modification of coastline, estuary and coastal conditions for development and invasive alien species.

The major cause for the unfavourable status is the abandonment of traditional agriculture (i.e. low intensity grazing and periodic cutting) since the 1950s, which has led to overgrowth with homogenous reedbeds, shrubs and trees. Historically, coastal meadows around the Baltic were grazed with dairy heifers, beef cattle, sheep, or mixed herds, either privately owned by farmers or jointly grazed as common land (Rannap et al, 2004). However, sheep grazing in Finland is rare as the meadows are too wet. Since dairy farming has become uneconomical on these grasslands, many have been abandoned. In Finland, the number of livestock farms and the number of livestock have declined drastically. Vegetation growth due to abandonment is exacerbated by eutrophication from diffuse pollution to surface waters from agricultural and forestry activities and from untreated wastewater from summer cabins or cottages (pollution from untreated urban wastewater ceased in the 1970s). Eutrophication drives the growth of thick reed beds in shallow water, and cattle will keep away from high reed beds.

The range of the habitat in Finland is at favourable status so the main issues addressed were to increase the surface area of the habitat type and improve the structure and function of existing occurrences. National support aims towards the restoration of coastal meadows in Natura 2000 areas and beyond by a series of actions aimed to reduce the extent of encroaching reed beds, followed by reinstating of agricultural measures for the upkeep of the habitat.

Conservation measures have been undertaken both with national funding by the Finnish conservation authorities as part of the delivery of nature conservation programmes (establishing protected areas), and the management of private and state owned protected areas, as well as by farmers motivated and financed by Finnish Rural Development Programme funding through agri-environment and non-productive investment payments under Pillar 2 of the Common Agricultural Policy. Meadow management was done in close co-operation with local cattle owners, who apply for agri-environment payments. Eradication of invasive species is done by local hunters. The most important measures for restoration of the habitat during the period 2013–2018 have been removal of reeds and shrubs and reinstatement of grazing with cattle or sheep. Other measures include maintaining existing extensive agricultural practices and agricultural landscape features; managing conversion of land for construction and development of infrastructure; and management, control and eradication of invasive alien species, mainly the American Mink (Neovison vison) and Raccoon dog (Nyctereutes procyonoides).

The role of Natura 2000 network is essential for the conservation of coastal meadows. Out of the total area, 56 km2 is located within the network. There are currently 98 designated areas for coastal meadows, with six new designations during the current reporting period. The importance of coastal meadows for breeding birds is highlighted with the fact that out of the total 98 sites 56 are also classified as SPA sites.

A key challenge was to grant access of grazing areas to cattle owners. While cattle owners were generally interested in expanding their grazing areas, this task required good coordination of potential areas, as well as good knowledge of potential farmers. Therefore, in many areas, a key issue is how to get farmers and areas to find each other. The good network of managed coastal meadows in state owned conservation areas on the southern coast of Finland, and the conservation agency’s database of state owned areas granted a “marketing” of these areas for potential farmers. A website is used for announcing available grazing sites or available grazing animals, maintained by Pro Agria (farmers advisory organisation).

The efforts during the current reporting period have been successful; the total surface area of Boreal Baltic coastal meadows in Finland was increased from 60 km2 to 62 km2. The status of structure and function of the habitat improved from U2+ to U1+. Approximately 68 % of the total habitat area is now in good condition and the trend is improving. Finland reported the overall conservation status as U1+. Coastal meadows are also a key breeding habitat of the Birds Directive Annex I taxa Baltic Dunlin (Calidris alpina schinzii) and Ruff (Philomachus pugnax) and also for Black-tailed Godwit (Limosa limosa). Thanks to the successful management efforts, especially in the northern parts of the Bothnia Bay, the breeding population of these rare species is locally increasing.

As this habitat type depends on continuous management the outlook of Boreal Baltic coastal meadows in Finland is linked with the available resources. National funding will be directed to the management of traditional rural biotopes through a new strategic nature conservation, restoration and management programme (HELMI-programme, 2020–2030) and coastal meadows are included within a recently launched LIFE-project (CoastNet LIFE, LIFE17NAT/FI/000544) focusing on the restoration of coastal habitats. CoastNet LIFE (2018-2025) has a total budget of over 8 M€. However, the key funding element for coastal meadows will continue to be the agri-environment payments through the Finnish Rural Development Programme. The positive trend of coastal meadows in Finland is thus dependent on the contents of the next period of the Common Agricultural Policy.

LIFE project “Gulf of Finland – Management of wetlands along the Gulf of Finland migratory flyway”: https://ec.europa.eu/environment/life/project/Projects/index.cfm?fuseaction=search.dspPage&n_proj_id=2459

The information presented here is based on

The work done as part of the European Commission study on identifying the drivers of successful implementation of the Birds and Habitats Directives (under contract ENV.F.1/FRA/2014/0063), carried out by the Institute for European Environmental Policy, BirdLife International, Deloitte, Denkstatt, Ecologic, ICF Consulting Services and PBL Netherlands Environmental Assessment Agency. The information and views set out in this case study are those of the authors and do not necessarily represent the official views of the Commission.

Mikkonen, N and Moilanen, A (2013) Identification of top priority areas and management landscapes from a national Natura 2000 network. Environmental Science & Policy No 27, 11-20.

Ministry of Agriculture and Forestry (2014) Coupled support ensures the supply of domestic raw materials to the food industry. http://mmm.fi/en/coupled-support

Ymparisto (2014) Fifth National Report to the Convention on Biological Diversity: Finland. Minstry of the Environment, Finland.