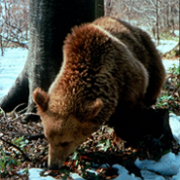 Brown Bears (Ursus arctos) are habitat generalists and traditionally occurred in much of the European region. Most of the Brown Bear’s former range has lost suitable habitat because of human alteration and presence. Today, Brown Bears mainly remain in mountainous and forested areas where they escaped widespread persecution that in many places only diminished from the 1950s onwards.

Within the Alps, after a long history of habitat degradation and persecution, by 1950 the Adamello massif/Brenta group of mountains in the Trentino region of Italy had become the last refuge for Brown Bears in the entire region, and by the late 1990’s the remaining population was approaching extinction. As part of the EU LIFE URSUS project, ten bears from Slovenia were translocated to Adamello Brenta National Park between 1999 and 2002 to reinforce the Alpine bear population.

Bears have a low reproductive rate and are vulnerable to human-related mortality. They require large habitats that make them vulnerable to changes in land use. The best bear habitat has already disappeared in Europe through logging and forest clearance, and the planting of exotic conifers has seriously altered local ecosystems in some places. Habitat fragmentation, particularly as a result of road construction, presents serious problems for a species requiring such large areas. Mortality caused by high-speed road and rail networks through bear habitat is a major threat in some areas. Poaching remains a threat to many, but not all populations, and takes place irrespective of population size. Five very small, isolated bear populations in southern and western Europe (in France, Spain and Italy), are highly threatened by their small population size. They could easily become extinct as a result of random fluctuations. The Italian Alpine bear population is one of these five populations.

In the Alpine biogeographical region, damage done by Brown Bears has significantly reduced public acceptance of the species, and their unnaturally high mortality rate in the Alps points to an increase in illegal removals. The two pressures Italy reports for its bear population in the Alpine biogeographical region are reduced fecundity / genetic depression in animals (inbreeding) as well as trapping, poisoning, and poaching, both with a medium importance. Both pressures are also reported as the two threats, but both with high importance.

The objective was to avoid the definitive loss of the last brown bear population in the Alps. The main action undertaken was the release of brown bears from Slovenia, genetically compatable with the local species. Education and information activities aimed to seek involvement and support of conservationists, hunters and local residence to reinforce the favourable attitude of the local population towards the species

The observed improvement in conservation status between 2007 and 2012 had been made possible in the first place by the successful reintroduction of Brown Bears in the Italian Alps between 1999 and 2002. With support of the LIFE URSUS Project, a dedicated Brown Bear recovery plan was implemented which included the release of five genetically compatible Brown Bears taken from the wild in Slovenia. In 2002 the first reproduction was recorded. The project also included an important monitoring component (radio-tracking) and a wide range of stakeholder awareness and engagement actions. Another important outcome was the testing and development of a detailed protocol for future capture and release operations, which included guidance on the handling of bears, required sanitary checks, transportation, release methods and equipment. Following these successes, a LIFE project URSUS Brenta II was undertaken, which aimed to help the new bears reach their minimum viable population (MVP) of between 40 and 60 individuals. This included the introduction of five additional Slovenian bears; and further improvements in monitoring and stakeholder engagement. The project also supported preventive measures, such as electric fences to protect livestock. Reproduction grew further to five cubs in 2005, and the after-LIFE report recognised that local stakeholder support improved measurably; research supported through the project provided important new insights in Brown Bear habitat requirements, suitability and –use including movement; and that the return of the Brown Bear also resulted in wider socio-economic benefits through branding of local food products and tourism. The period 2007-2012 primarily saw a continuation of management practices set in motion since the 1999-2002 introductions, and from 2008 onwards the PACOBACE agreement and 2010 Action Plan formalised the strategy and measures.

The primary stakeholder for the successful Trentino reintroduction is the management authority of the Adamello Brenta National Park (ABNP). The ABNP came into existence after the area had become the last known Alpine refuge of Italian Brown Bears and was the location where the 10 Slovenian bears were reintroduced between 1999 and 2002. The Forestry and Wildlife Department of the Autonomous Province of Trento is the other principal government body responsible for the management of the Brown Bear in the Italian Alps working together with authorities of surrounding regions most notably Veneto, Lombardia and Friuli Venezia Giulia. The Province of Trentino publishes a yearly bear report in English. The Ministry for the Environment and Protection of Land and Sea (MATTM) and the Italian Institute for Environmental Protection and Research (ISPRA) play an important role in international coordination and research and monitoring. The former State Forest Service, now command unit for forestry, environment and food protection has played an important role in improving forest management practices and better preparing forest managers on the (future) presence of bears. A wide range of local stakeholders from various perspectives, most notably the Hunting Association of the Trento Province, Trento WWF, and sectoral organisations of economic professions particularly affected by bear presence such as livestock farmers and beekeepers. International coordination and cooperation initiatives such as the Large Carnivores Platform of the Alpine Convention, EU Platform on Coexistence between People and Large Carnivores and the IUCN bear specialist working group.

The Brown Bear reintroduction in Trentino (Italian central Alps) has been a well-organised project, which has successfully achieved its initial goals and become an important reference in large carnivore conservation in Europe. The 10 released bears adapted to the new area, and increased to 47 by 2017. During the 2007-2013 reporting period the new bear population doubled in size, and in 2012 the area with a stable presence of females was estimated to cover around 1 250 km2, all of which located in the Province of Trento (minimum bear density of 3 bear/100 km2) and encompassing the sites where bears were first released. Moreover, the average annual growth rate of the species has been very high (20% just after the release, 15.6% in 2015). In recent years dispersing animals from the southern Alps and Dinaric populations have been overlapping suggesting an increased likelihood for a natural solution to the growing risks of inbreeding.

The key funding sources for the implementation of measures have been national funding for the environment as well as EU funding from the LIFE Programme and, to a lesser extent, through the European Agricultural Fund for Rural Development. As mentioned previously, LIFE funding enabled the reintroduction and following recovery of the Brown Bear in the southern Alps in the first place. Moreover, various LIFE projects continued support for Brown Bear conservation between 2007-2012.

Next to the positive ecological impact of a continuous bear presence on the southern Alpine forest habitats, a sustainable bear population will also support tourism activities in the Adamello Brenta National Park and surroundings. A study on the monetary marketing value of the Brown Bear in the Italian Alps found that it greatly exceeds the amount of reimbursements for damages. Moreover, the conservation actions for the Brown Bear at landscape-scale level, through for example the designation of protected areas, habitat restoration and improvement, and the reduction of ecological fragmentation, will benefit a wide range of other habitats and species.

Key targeted conservation measures that led to the improvements

Factors that constrained the conservation measures

Temple, H J and Terry, A (Compilers) (2007) The Status and Distribution of European Mammals. Luxembourg: Office for Official Publications of the European Communities., http://ec.europa.eu/environment/nature/conservation/species/redlist/downloads/European_mammals.pdf