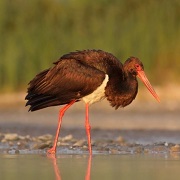 The Black Stork (Ciconia nigra) is a waterbird species that breeds in Europe, with most of its population migrating to Africa in winter. Although it is scarce, its threat status is considered to be of ‘Least Concern’ both globally and within Europe, as its population has been increasing. It predominantly feeds in wetlands, but requires old, undisturbed and open forests with old trees with large canopies for nesting.

The main pressures and threats to the species are human-induced habitat degradation caused by deforestation, the rapid development of industry and farming, as well as the construction of dams and drainage of lakes for hydroelectric power production and irrigation.

The species is highly affected by human disturbances and will abandon its nests in the presence of foresters or hunters. The principal conservation measures that have increased the Black Stork’s population have included the restoration of wetland and nesting habitats and the construction of artificial pools for feeding. LIFE projects have helped restore such areas and raised the awareness of local communities for the species and its needs.

Forest and plantation management and use, large-scale water diversion, suspended electricity and telephone lines, and other human intrusions and disturbances are challenges faced by the species. This is particularly the case for the Black Stork population of Hungary, which has been observed abandoning its nests due to disturbance by forest maintenance workers and hunters. Other pressures can be linked to climate change and natural processes (e.g. decrease in precipitation). Overall, though, habitat degradation is the main threat to the species. Rapid development of industry and farming as well as the construction of dams and the drainage of lakes used for hydroelectric power production and irrigation are also contributing to habitat degradation. These activities both reduce nesting habitats through the construction of new buildings or clearing for farms, as well as reduce feeding grounds suitable for the Black Stork through damming rivers or reducing water flow from irrigation. Occasionally, Black Storks can be killed by colliding with power lines and overhead cables, and illegal hunting in southern Europe whilst on migration.

The Black Stork requires old, undisturbed and open forests for nesting. It builds large nests composed of sticks positioned between 4 to 25m high in large forest trees or along cliffs (e.g. in Spain). The species prefers to nest in trees generally 25m high, about 120 years old and roughly 66 cm in diameter at breast height, with canopies large enough to hold the nest away from the main truck of the tree. Pairs are spread throughout the landscape at a distance of no less than 1 km, even in areas where the species is numerous. The objective for restoring the species population is thus strongly dependent on restoring and preserving these unique habitats.

The Danube LIFE project aimed to improve the conservation status of floodplain bird species. As such, the most threatened natural habitats needed to be restored and appropriate site management introduced. In addition, conditions for long-term sustainability for the bird species needed to be created and outreach made to raise awareness of key stakeholders and the public regarding the conservation of riparian habitats. Project objectives included:

LIFE projects indirectly contributed to the improvement of this species, mainly through the restoration of forest ecosystems and habitats. For example, the LIFE project ‘HUNSTEPPICOAKS’ sought the long-term conservation and improved conservation status of the Euro-Siberian steppic woods and Pannonic sand steppes in the Natura 2000 site Nagykőrösi pusztai tölgyesek. Consequently, these activities also supported habitats suitable for Black Stork in Hungary. Similarly, the LIFE project ‘DANUBEISLANDFOREST’ also provided indirect benefits for the species, as it too sought the conservation of alluvial habitats where the Black Stork can be found in Hungary. The project focused on the site of community interest on the Szabadság Island and side channel in Béda-Karapancsa. Understandably, neither project provided information on how their respective activities influenced the population or breeding sites of the Black Stork, as their main objectives were focused elsewhere.

The main project that made a key contribution to the improving status of the population of the Black Stork in Hungary, was the LIFE project ‘Conservation of endangered bird species populations in natural habitats of the Danube inland delta’, which ran from January 2009 to December 2015. The project covered the SPAs Dunajské luhy (Slovakia) and Szigetköz (Hungary), which focused on a large inundation area at the Danube River between the villages Rajka and Göny, Moson Danube and scattered well-preserved wetlands within the Szigetköz. The project was led by the Regional Association for Nature Conservation and Sustainable Development in Slovakia, in conjunction with project partners from Slovakia’s State Enterprise for Water Management Construction, Comenius University’s Faculty of Natural Sciences in Bratislava, Slovakia, Hungary’s North-Transdanubian Environmental and Water Directorate , and Hungary’s Nature Conservation Association.

Although the LIFE projects did not quantify their impacts on the population and habitat area of the Black Stork, they did provide qualitative accounts. For example, the Danube LIFE project stated the restoration activities resulted in the return of the species to the area for feeding as well as nesting. Project activities mainly resulted in the creation of new feeding habitats for the species, as well as the restoration of suitable forest habitats. As the project activities focused on long-term conservation goals, it was not expected to have immediate results regarding the Black Stork’s population numbers, but they are expected to improve in the future.

The Danube LIFE project aimed to conserve floodplain bird species within the SPA Dunajské luhy and SPA Szigetköz. This not only included the Black Stork, but also other species such as Kingfisher (Alcedo atthis), Garganey (Anas querquedula), Gadwall (Anas strepera), Purple Heron (Ardea purpurea), Marsh Harrier (Circus aeruginosus), Black Woodpecker (Dryocopus martius), Little Egret (Egretta garzetta), White-tailed Eagle (Haliaeetus albicilla), and others. Similarly, other LIFE projects that contributed to the conservation of the Black Stork (including HUNSTEPPICOAKS and DANUBEISLANDFOREST) also benefited other species in the forest areas they restored and managed.

Various funding sources contributed to the conservation actions taken for Hungary’s population of Black Stork. For example, the Danube LIFE project had a total cost of €4,577,663, half of which was met by the European Commission (i.e. €2,288,831) with remaining from the project beneficiaries own contributions (i.e. €2,288,832). In addition, the Hungarian Prioritised Action Framework (PAF) for Natura 2000 in 2014-2020 listed several funding sources relating to activities in Natura 2000 sites, including funding from the European Agricultural Fund for Rural Development (EAFRD), European Fisheries Fund (EFF), Structural Funds and Cohesion Funds, LIFE+, and Swiss-Hungarian Contribution.

WWF (2011) Restoration of the Liberty Island and its side-arm on the Danube, World Wildlife Fund (WWF) http://ec.europa.eu/environment/life/project/Projects/index.cfm?fuseaction=home.showFile&rep=file&fil=LIFE06_NAT_H_000098_LAYMAN.pdf