What is green infrastructure?

Green infrastructure (GI) is a network of (semi-)natural areas which are protected and enhanced to deliver ecosystem services, while also benefiting biodiversity and society more widely. The European Commission highlights the strategic planning aspect of GI, which brings these areas together to form a physically or functionally connected network across rural and urban areas. Incorporating terrestrial and aquatic (freshwater and marine) features (i.e. blue and green), green infrastructure can be comprised of pure nature or be part of a hybrid approach combining grey and green infrastructure to achieve resilient solutions. Examples of the former include fish migration channels, high-value farmland, parks, forests, floodplains and water retention areas, while hybrid approaches are green bridges, roofs and façades. Such interventions can be deployed at different scales, such as at a site-scale (e.g. green facades or roofs on a building, green courtyards, sidewalks, streets), city-wide (parks, urban forests) or at a landscape scale (e.g. green hubs and corridors).

Examples of green infrastructure across an urban-rural landscape 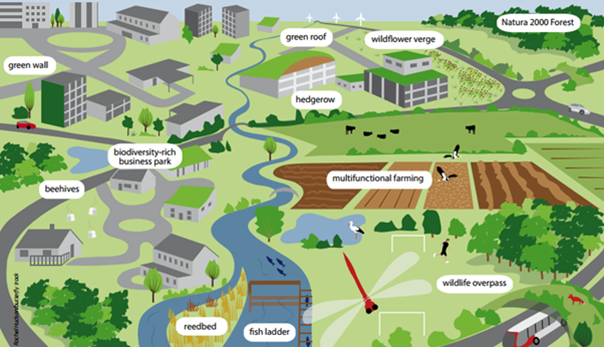 The European Commission adopted a Green Infrastructure Strategy in 2013 “to promote the deployment of green infrastructure in the EU in urban and rural areas” in support of biodiversity conservation goals against the background of rapid urbanisation and landscape fragmentation. But how does GI support biodiversity? Green infrastructure maintains and restores ecosystems and ensures the continued delivery of their services and provides the habitats and resources that species need to survive. Spread across and between cities, GI can act as core habitats or stepping stones for species. Core areas consist of larger natural or near-natural spaces joined together into networks by smaller green and blue infrastructure elements called ‘stepping stones’. These smaller elements, such as hedgerows, street trees, renaturalised river banks, green roofs, biodiversity buffer strips in agricultural areas, swales and ponds, can physically or functionally connect core areas (e.g. for migrating species to rest and breed). The Natura 2000 network makes up an important part of this green infrastructure network in Europe, protecting 18% of the EU’s land area and 10% of its marine territory.

Green infrastructure has strong overlaps to the concepts of nature-based solutions, natural water retention measures, ecosystem-based disaster risk reduction, and ecosystem-based approaches to climate adaptation and mitigation. While each concept has emerged out of different sectoral and policy needs and thus differs in its specifics, they shared the aim to utilise nature as a tool for addressing societal challenges in a cost-effective and sustainable way. The design of GI determines the scope of benefits it can provide, such as: climate change mitigation and adaptation, habitat connectivity for biodiversity, water and air quality regulation, improved human health and well-being, or flood protection.

The following pages provide deeper insights into a range of GI-related topics.