All forms of pollution pose a serious threat to biodiversity, but in particular nutrient loading, primarily of nitrogen and phosphorus, which is a major and increasing cause of biodiversity loss and ecosystem dysfunction. Atmospheric nitrogen deposition represents a major threat to European biodiversity and a serious challenge for the conservation of natural habitats and species. In addition, nitrogen compounds can lead to eutrophication of ecosystems. The main pollution sources are from transport and agriculture. It is the only air pollutant for which concentrations have not decreased in Europe following the implementation of legislation.

For many European ecosystem types, studies have concluded that nitrogen deposition results in loss of species richness. Peatland ecosystems provide an example of how species replacement, resulting from nitrogen deposition, may alter ecosystems functionality. For example, the carbon sequestration capacity of rain fed (ombrotrophic) bog ecosystems decreases when subjected to elevated nitrogen inputs. 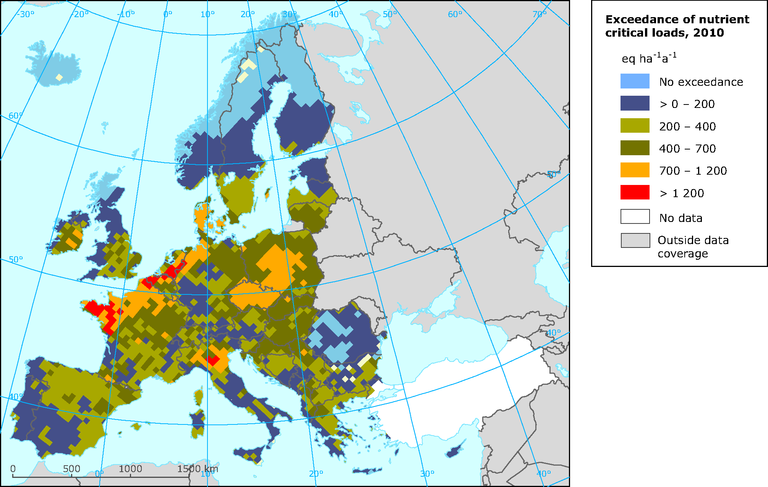 The critical load of nutrient nitrogen is exceeded by more than 1 200 equivalents nitrogen per ha and year in western France, some parts of Belgium and the Netherlands, and the North of Italy.

Pollution continues to be a major problem affecting most of the European seas, in spite of the reduction in point sources (e.g. sewage outfall pipes or fish farm effluents) of nutrients in some areas. Nitrogen and phosphorus enrichment can result in a chain of undesirable effects, starting with excessive growth of planktonic algae, which increases the amount of organic matter settling to the seabed. This accumulation may be associated with changes in species composition and altered functioning of the food web.

FATE and impact of pollutants in terrestrial and aquatic ecosystems